After three years, I finally made it back to SHOT Show in Las Vegas! If you’ve never been to SHOT before, imagine the biggest gun show you have ever been to and think of roughly 62,000 people being there in a huge (I mean HUGE) space. Then imagine every gun manufacturer you can think of having a huge booth staffed with knowledgeable people who love the shooting and hunting sports. I have been to three SHOT shows now in total. I forgot how big SHOT is and how much walking there is to do there. By the end of each day, I was ready to crash into my bed at the Excalibur hotel. The Las Vegas strip is considered one of the main realms for vacations and conferences in the world. It is a wild place to host such a giant convention for a bunch of 2nd amendment fans and Sin City was full of many like minded individuals that believed in God, Guns, and Country. Few trips have been as memorable as my SHOT show expeditions. There are so many new products, companies, media folks, attendees, celebrities, and more. To quote one food service employee I overheard talking to another worker, “These guys are gun owners. They want two things: meat and beer!” That may be a bit of a stereotype but… I digress. Here are a few pictures from the show floor and a night shot of my hotel:

Who Did You See at SHOT This Year

Eva Shockey, Jim Shockey, Bruce Mitchell and Troy Landry (and sons) from the Swamp People TV Show, the cast from Duck Commander/Duck Dynasty (yes, including Uncle Si). No, I didn’t stand in line for hours to get an autograph from anyone but it was a star studded experience seeing all of these people I have watched on TV for years.

I did get to visit with a couple other TV celebrities that I hold in high regard. The first one is a fellow outdoor writer for Texas Fish & Game magazine and winner of Top Shot Season 3. Dustin Ellermann makes marksmanship and the shooting sports look easy. He is a true professional in many ways and I had the chance to eat lunch with him at a media event last Wednesday. I’ve been a fan of Dustin since he starred on Top Shot a few years ago and he is an awesome guy. In the picture below, you get two Dustins in one picture. Dustin squared! 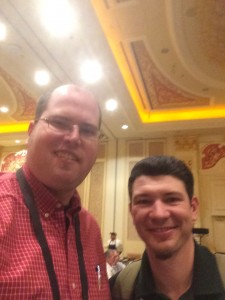 My apologies for the lighting of this photo. It was one of those quick, in the moment,  hurry up and take a picture, kind of photos. It was awesome to finally meet him in person.

The second celebrity I ran into was Mark Millis but you may know him better as “Uncle Millie” from the past show Deer City USA on Outdoor Channel and now Huntin’ the Backwoods TV show on Sportsman Channel. Mark was awesome to meet in person and I hope to stay in touch with him as we both are involved in many outdoor industry projects. 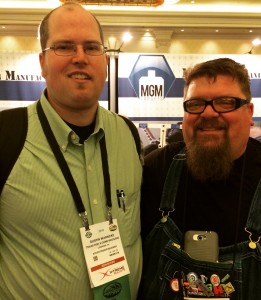 So What was New or Super Cool this Year?

I’m glad you asked! I was at SHOT show this year with Elliott Donnelly, Chester Moore, and Ardia Neves from Texas Fish & Game magazine (notice a theme here?). Elliott is the digital publisher for TF&G. Chester is editor in chief and Ardia is our advertising director. We had a great time together. Ardia and I concentrated on advertising work for the magazine and Elliott, Chester, and the other Dustin walked the long hallways, ballrooms, and exhibit halls searching for what was new and awesome. Since I didn’t have a chance to cover the entirety of the show from a media perspective like they did, I wanted to post some to their blog posts from last week and this week:

One of the most unique tactical finds I ran across was this DP-12 double barrel bullpup shotgun. It holds 16 rounds and is a newer addition to the line up of tactical shotguns. Normally I am not very impressed by guns like this but this one caught my eye for sure. 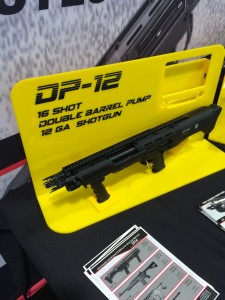 There are so many outlets that cover SHOT so this is certainly not all of the media coverage out there. Our team did pick some of the best of the best in new products though. 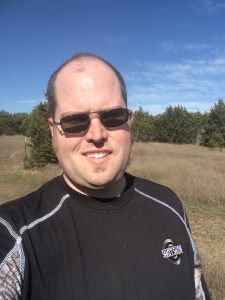 I also picked up a styling SHOT Show long-sleeve shirt which I wore out on a trip to my deer stand right after I came home. Yes, I took a “selfie” photo of me wearing it! I pulled my ground blind, game cam, and other gear out of the woods for the season. I had a great deer season and have one more hunting video from this year which I am still editing and will release shortly. See my videos, articles, other blogs and podcast at DustinsProjects.com. Thank you for watching, reading, and listening!

It has been far too long since I visited my local gun range. A month or so ago, in a pinch for time, I visited a local Austin indoor range but they charge by the hour and I like a more relaxed feeling when I am immersed in the shooting sports. Like most people, I don’t like to be rushed by the clock doing something I enjoy. My normal range is an outdoor range located Northwest of Austin and they charge a daily rate for shooting time. This range is also where I cut my teeth at learning about guns, calibers, ballistics, and other working pieces in the realm of firearms. Formerly Stan Shooting Range, the Lone Star Range & Academy has undergone many transformations under its new owner and I was impressed, to say the least. at the new developments at this range.

I visited the range to sight in one of my beloved guns, a custom FN Mauser chambered in .270 as the scope had been off on its last outing with a friend of mine. The main reason for the trip was to spend some time behind the  “Texan” from Airforce Airguns, the most powerful big bore production air rifle on the market.

The Mac & Prowler TV show team came up with the name of “The Beast” when shooting the first prototype of this gun. It shoots a .45 caliber slug at around 1,000 feet per second which is impressive to say the least. This is a true big game air gun and I plan to film a hog hunting video with it very soon. So it’s powerful. How about accuracy? I’m glad to asked. Here is a picture of one of my groups. This was before I dialed it into the 10 ring later: 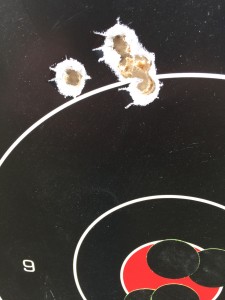 It is most definitely one of my favorite guns and one of the coolest guns I own. Check out the podcast “Prowler” Bill Henson and I did on this gun and the other airguns available from Airforce:

My plan is to take this gun on a hog or exotic game hunt in the very near future. If you haven’t checked out airguns in the shooting sports realm, now is the time! It is fun way to enjoy the shooting sports and Airforce Airguns makes some phenomenal airguns. Thank you as always for watching, reading, and listening! Have an awesome day in the outdoors!